THE winners of the inaugural Love Sherborne Awards have been announced and Sherborne Abbey Festival picked up a trophy for BEST COMMUNITY EVENT. 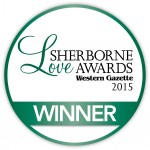 Editor of the Western Gazette Emma Slee welcomed the nominees and their guests. She said: “These awards were born out of our desire to celebrate what’s special about Sherborne – the people, the places, the businesses and the community groups.

“It became quite evident, quite quickly, that the public agreed with us that these things should be recognised, based on the response from the community and the nominations received.

“A panel of six judges had the difficult task of deciding the winners out of the very worthy finalists in each category. Each judge submitted their scores individually, which were then calculated to produce the final results. I would like to thank each one for their efforts – the judging pack was substantial and each judge spent a lot of time poring over the submissions.

“What I can say, however, and I know the judges will agree with me, is that every finalist here tonight is a winner. Your stories are inspirational. You are all helping to make Sherborne unique and shine like a beacon of “the West Country.”

Before announcing the winners she thanked Canon Eric Woods, for the use the beautiful venue, Steve Lee, the manager of Waitrose, for sponsoring the drinks reception and Mike Burks from the Gardens Group for providing the wonderful horticultural displays.

The first two awards presented were Favourite Retailer of the Year and Most Welcoming Food and Drink Establishment. These awards were not assessed by the judging panel but the venue with the most public nominations was declared the winner.

All of the other awards were decided by the judging panel.

The results are as follows:

Favourite Retailer of the Year

Most Welcoming Food and Drink Establishment

Sherborne Ambassador of the Year

Winner: Andrew Maddock, Midwest the Stationers and Chairman of Sherborne Chamber of Trade

Community Group of the Year

Employee of the Year

Best Community Project or Event of the Year

Business of the Year