VOCES8 – teaching the world to sing! 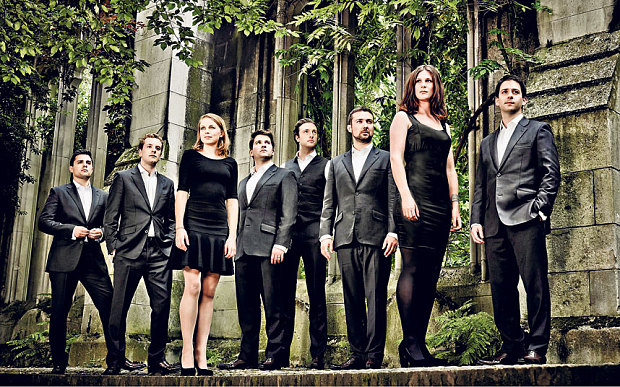 Voces8 is no ordinary choir.

It believes in the power of music to enhance lives and is helping schools far and wide.

Jake Wallis Simons reports in The Telegraph
A short walk from St Paul’s Cathedral lies St Anne and St Agnes church. Designed by Sir Christopher Wren, it is a cavernous place with a hint of history in the air; it is here that the great poet John Milton used to pray.

In 2013, its worshippers left to join another congregation, and the church was falling on hard times. But new life now courses through its pews. Walk past at any time of day, and you are likely to hear soaring choral music echoing from inside. And it’s singing with a difference. The church, renamed the Gresham Centre, has been taken over by the vocal ensemble Voces8, and repurposed as an “international centre for vocal excellence and outreach”.

“It is being renovated and upgraded, and when it is finished it will be glorious,” says baritone Paul Smith, 32, one of the founders of the Voces8 group. “But we’re not waiting for that. It is already open as a rehearsal and recital venue, and we are already running workshops pretty much every day.”

This is characteristic of the unusual energy and commitment that underpins Voces8. The group is a multi-award-winning classical singing ensemble in its own right. It has recently signed a deal with the Decca Classics label and released its first album, Eventide.

But the singers’ own careers are only one aspect of the Voces8 project. “We really believe in the power that music has to benefit people’s lives,” says Andrea Haines, 27, one of the group’s two sopranos. “The group is run by a charity that we set up in 2006, and our main goal is to bring the joy of singing to as many people as possible. Voces8 is just the flagship ensemble, the figurehead.”

The church has now become the hub of a musical outreach project that reaches more than 20,000 people around the world each year.

It began in 2005. Paul Smith, his younger brother Barnaby and their friends Dingle Yandell and Ollie Vincent were old schoolmates from Westminster Abbey Choir School. They had formed a 24-person chamber choir called Voces Cantabiles, and wanted to enter the illustrious European Choral Grand Prix competition in Italy.

In order to qualify for the jazz and pop category, they whittled down their choir to eight members. They won the competition easily. The rest is history.

“The other members of the choir understood,” recalls Barnaby, 30, a counter-tenor. “They all went off to pursue different careers. There was something special about the eight of us, and we just knew we could make it work.”

Before long they had more bookings than they could handle and decided to go professional. From the start, musical outreach was a key part of their philosophy.

They were all aware that they had benefited from “a top-class musical education” – Emily Dickens, a 26-year-old soprano, was one of the first female choristers at Winchester Cathedral, and Chris Wardle, 34, sang as a boy treble in operas at Glyndebourne – and they wanted to bring some of these benefits to people who were less fortunate.

In 2011, after the tsunami that devastated many parts of Japan, the group travelled to the country to conduct singing workshops with children affected by the disaster.

“It doesn’t seem like the most obvious way to help people who have lost everything,” says Paul Smith. “But while aid organisations worked to help people physically, it was our way of trying to let the kids express themselves and open up.

“It was hugely positive. Students in Japan can often be reserved and shy, but for a short while they could make music and have a positive experience. It was very moving.”

The “power of music” is not without scientific foundation. The group has developed a set of vocal exercises to enhance children’s musical and overall academic performance. This method, which is currently being used in several schools in Britain, is based on a 2010 study conducted by Professor Sue Hallam, a researcher at the Institute of Education in London.

“It is a well-established fact that there is a large overlap between the skills that the brain uses for understanding music and understanding speech,” she says. “So regular musical workshops can greatly enhance reading and literacy. It is also likely that the rhythmic patterns of music can have a positive effect on numeracy and mathematical ability.”

Her study found that eight-year-old children with just eight weeks of extra musical training showed an enhanced “perceptual cognition”, and improved performance in “tests of music and language”.

At Queen Anne’s independent girls’ boarding and day school in Caversham, Berkshire, the method has been used for four years.

“The exercises were first introduced by Voces8 to the whole school at eight in the morning, possibly the worst time of day for teenagers,” says John Padley, the school’s director of music. “But as soon as it began, the whole atmosphere changed. The girls had been expecting hymn practice, and it was a riot. I don’t think chapel has ever been so noisy.”

Such have been the benefits that the exercises have become a permanent part of school life. “If you can imagine it happening in all schools across the UK, it would have a tremendous amount to offer,” says Mr Padley. “It is an excellent way to invigorate the children and give them a new sense of focus.”

In the school hall, 12 girls engage in the method. It blends physical movement with vocal exercises, and looks, above all, great fun.

“My brain feels more supple and easier to focus afterwards,” says Tiajna Amayo-Izeker, 17. “I’ve even introduced the exercises to my A2 history teacher when the lesson is really boring. It has made a difference.”

Caitlin Croke, 16, has never been confident with music. “I was always really bad. I’m not taking GCSE music or anything,” she says. “But the Voces8 method really helps. I can actually read sheet music now.”

Indeed, regular music practice can be especially helpful for dyslexics, and children who find learning difficult.

“Because of my dyslexia, I can visualise a whole score but I struggle with the mathematical side of music,” says Dingle Yandell, 32, the bass singer in Voces8. “But music has had a massive impact on my life, and I think it has been good for my brain overall.”

Queen Anne’s school is part of a foundation that includes inner city state schools. Although the musical curriculum at the state schools is of a much lower standard, the Voces8 method is used there too.

Several times a year, pupils from all the foundation schools get together for musical workshops, and later this year a choir from each of the schools will put on a Voces8-inspired concert in central London.

On a wet January evening, Voces8 is rehearsing in the Gresham Centre, their new home. This will be their final practice before they leave on a tour of Europe. As their voices lock together in a rendition of Thomas Tallis’s Te Lucis Ante Terminum, dog walkers in the churchyard stop for a moment to listen. For the St Anne and St Agnes church, this is paradise regained.

The album Eventide by Voces8 is out now on Decca Classics. They perform at St Gregory’s Centre, Christ Church Canterbury, on March 13; voces8.com

Come and see VOCES8 at Sherborne Abbey Festival on 5th May.  Read more about their performance ‘DEVOTIONS’