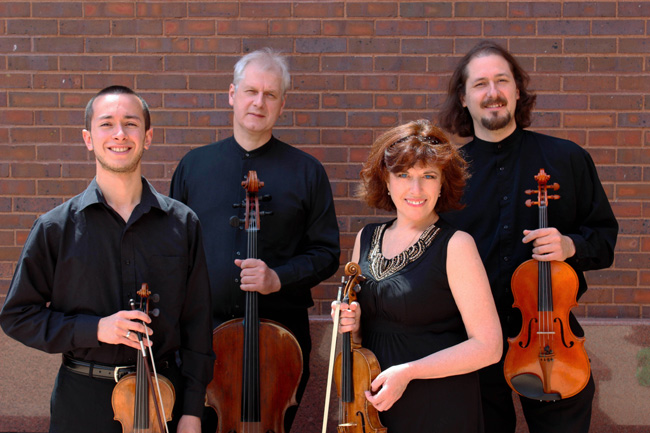 There are still a few seats available for the St Petersburg String Quartet concert taking place in Milborne Port, 11 July at 11am.

The St. Petersburg Quartet is one of the world’s most esteemed chamber ensembles. Their rise to fame has included a Grammy nomination, “Best Record” honors in both Stereo Review and Gramophone, an opening night performance at Mostly Mozart at Lincoln Center, a five-year residency at the Oberlin Conservatory of Music, and hundreds of concerts on many of North America, Europe and Asia’s most prestigious series and festivals.

Their current season includes a performance at Carnegie Hall; a six-concert series at New York City’s popular BargeMusic Series, where they will perform the complete Shostakovich cycle; a collaboration with the Naumberg Piano Competition winner Anton Nel; three concerts at the Los Angeles Music Guild; tours of England and France; and concerts in Connecticut, Florida, Texas, California, Louisiana, Kentucky, Kansas, Idaho and Mexico.

Highlights of recent seasons in North America include playing the opening concert of the Chamber Music Society of Lincoln Center quartet series (the New York Times praised their “sumptuous account of Tchaikovsky’s Quartet No.1”); a collaboration with Van Cliburn Gold Medalist Olga Kern; a tour with violist Michael Tree of the Guarneri Quartet at the Library of Congress; three concerts at New York’s Metropolitan Museum with the late Ruth Laredo; and a 17-concert tour of Canada, during which the Toronto Globe and Mail wrote, “Bliss, for this listener, doesn’t get much more unequivocal than the St. Petersburg Quartet’s performance.”

Abroad, the SPSQ has recently toured the Netherlands, Spain, Germany, Sweden, Denmark, Israel and the U.K., where Tchaikovsky Piano Competition winner Peter Donahoe called their collaboration “some of the most sublime moments of chamber-music making I have ever experienced.”

The latest release in the SPSQ’s extensive discography include CDs of Ravel and Debussy quartets as well as the complete chamber music works of Tchaikovsky.

Alla Aranovskaya and Leonid Shukayev are founding members of the SPSQ; Boris Vayner joined in 2005 and Luis Angel Salazar Avila in 2014.