Our first full Festival in 3 years was the biggest yet with 8 days of concerts featuring a winning combination of world-class performances alongside outstanding local talent and some truly exceptional performances from the young people of Sherborne School, Sherborne Girls and Leweston School.

For more information on events, tickets or any other general enquiries please get in touch.

To the surprise of everyone, the beautiful new piano which we purchased for the Abbey arrived much sooner than expected and was such a wonderful asset during the Festival. It was put to good use from the get-go with a marvellous piano solo during The Sherborne School Chamber Concert.

Another instrument worthy of admiration was the beautifully handmade lute which was crafted by lutenist Cédric Meyer, specifically to compliment the voice of tenor Kieran White during their concert! 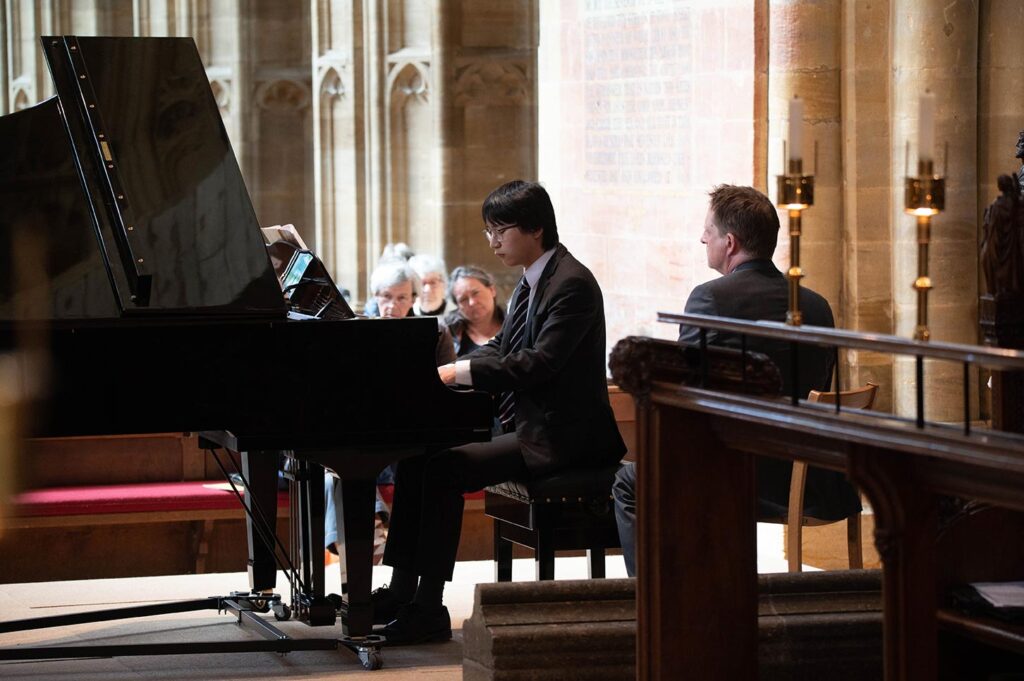 Perhaps the most fun instruments, however, were those provided by Paul, founder of the Drum Runners Workshop. Held outside the Abbey on a lovely sunny day, children (and many grown-ups!) were invited to join in the fun by beating the colourful drums, each decorated with a character from one of Paul’s songs!

Some of our volunteers were among the adults who enjoyed themselves during this workshop, it was a lovely reminder of how much fun can be had as a volunteer during the Festival, and as new recruit Angela said: “As someone new to the area it has been a lovely way to meet new people!” Another perk of volunteering is being able to watch world-class concerts for free! The opening night provided this very opportunity as the astonishingly talented Jess Gillam MBE dazzled a full Abbey with the sound of the saxophone. She was joined by well-known violinist Ruth Rogers and the Iuventus Chamber Orchestra in a double-bill of concertos which was sponsored by Charterhouse Auctioneers. 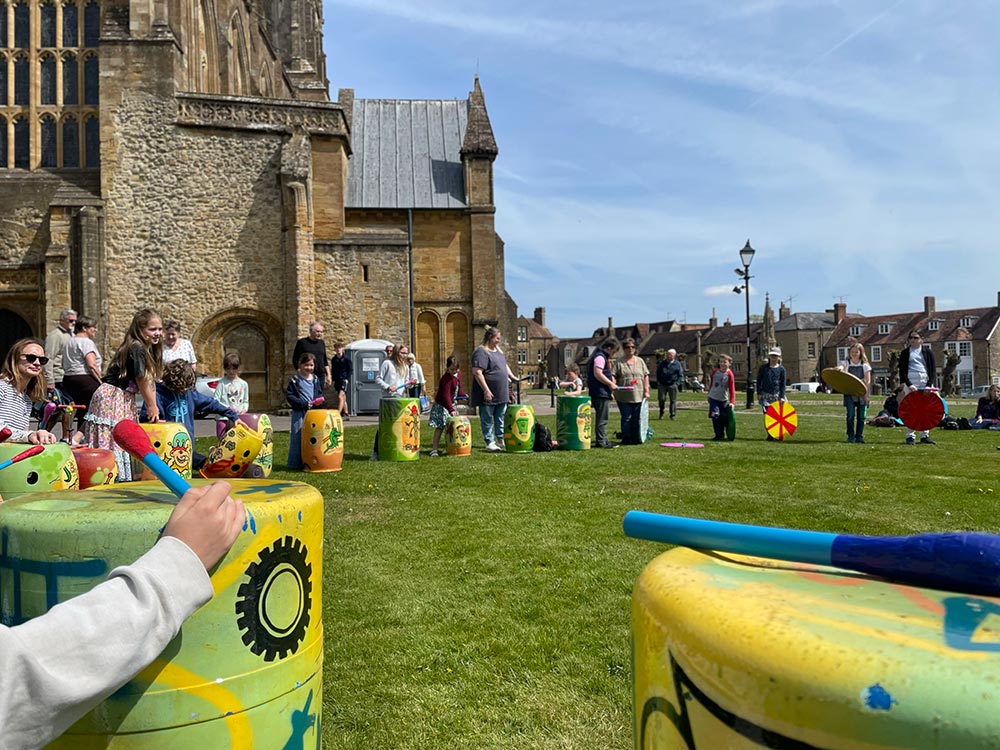 Our Patrons (at all levels) are instrumental to the ongoing success of the Festival which is now 22 years old! Our Gold and Platinum Patrons were treated to a garden party with drinks and canapés on the opening night. Pre-concert drinks were another opportunity for our Gold and Platinum Patrons to socialise and enjoy a drink together before taking their seats for the evening concerts. 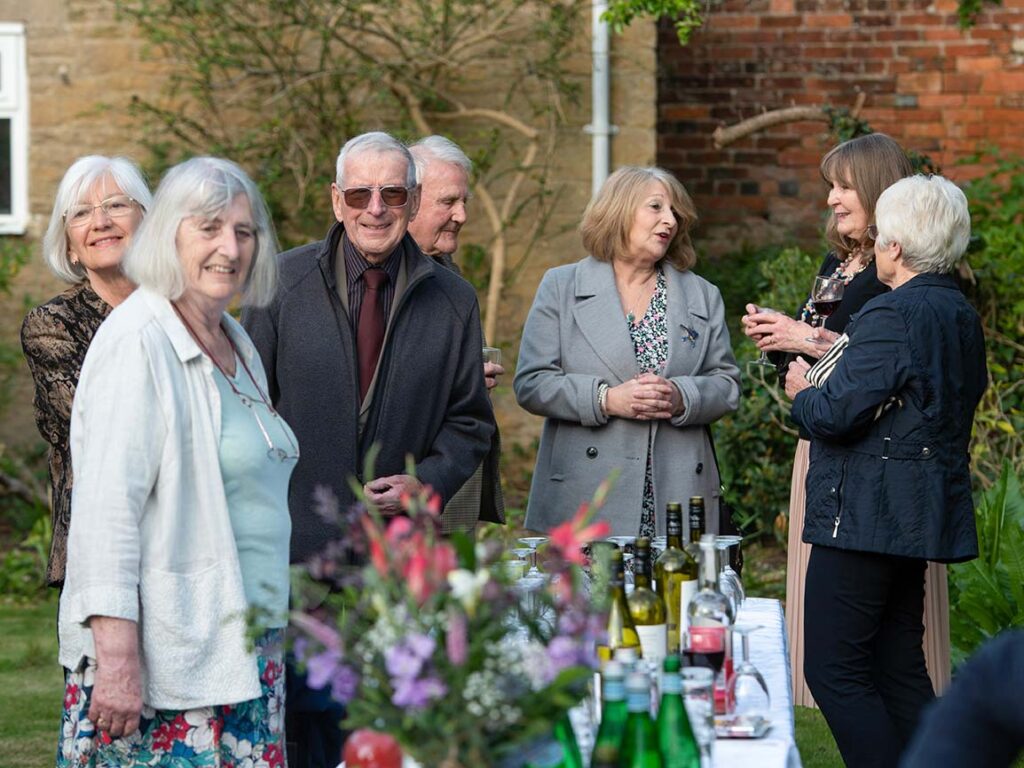 On the Saturday evening we welcomed the award-winning Tenebrae choir, one of the world’s leading vocal ensembles. They performed their “Queen of Heaven” programme to an enraptured audience and later praised the Abbey, its acoustics and spoke of a desire to return.

Another who spoke highly of the Abbey was organist Matthew Martin whose organ recital attracted a large number of people despite the early hour and received a standing ovation from a very impressed audience!

It wasn’t all plain sailing however, as clarinettist Michael Collins had no choice but to cancel after a positive Covid test, but fortunately Julian Bliss stepped in and saved the day with an outstanding performance alongside Ruth Rogers and the Principal Players of the London Mozart Players. Julian was even able to join Ruth for the planned pre-concert talk in the Abbey. 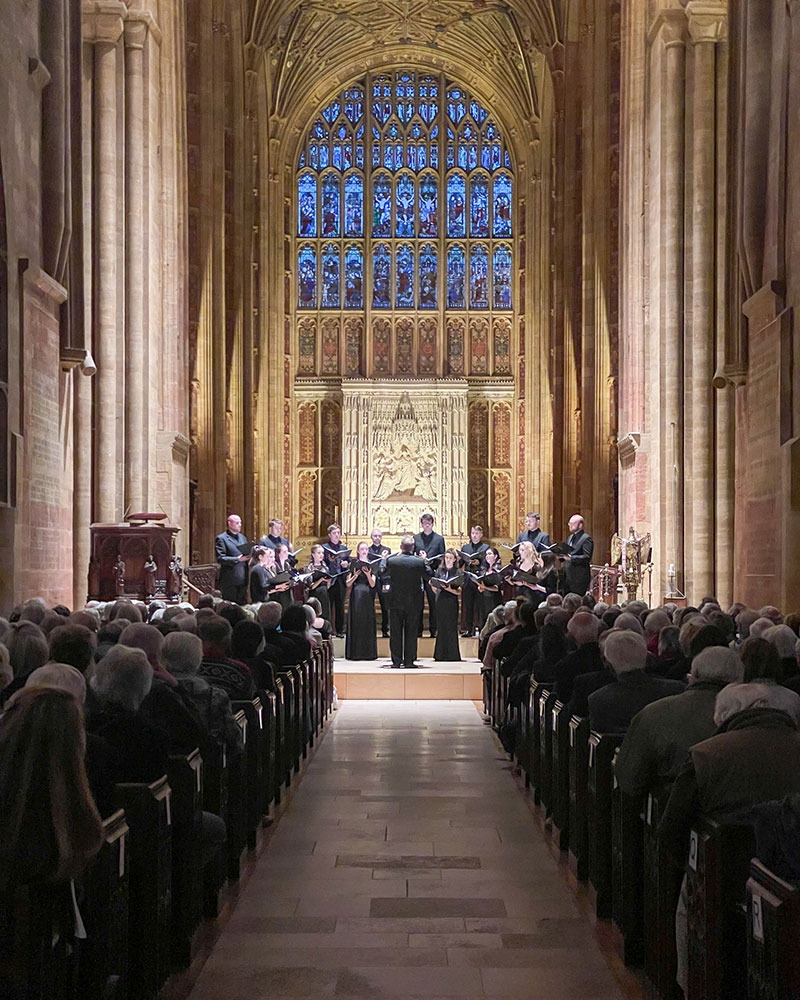 In another victory against Covid, Leweston School Schola Cantorum performed the same programme they had planned for 2020 and featured pupils who have since left the school who didn’t have the opportunity to perform back in 2020 when the Festival was cancelled due to Covid. 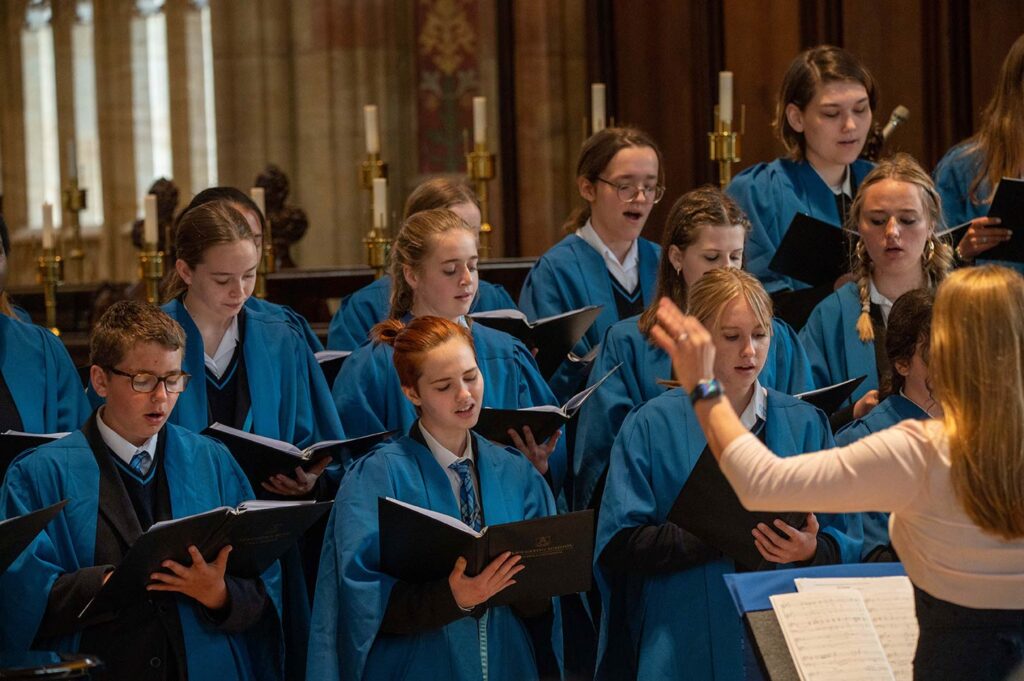 There were so many wonderful moments throughout the Festival and such a brilliant atmosphere in the town with many businesses contributing in various ways. The Plume of Feathers hosted two sell-out evenings of dinner and opera. Canapés and Prosecco were served followed by an Italian-style 3-course meal; each course interspersed with the world’s greatest operatic masterpieces! The Cross Keys closed the Festival with a fabulous evening of dinner and jazz with the Mark Lockheart and Huw Warren Quartet. Guests enjoyed a welcome drink followed by a delicious 3-course menu designed especially for this event!

As we reflect on this year’s Festival, work has already begun preparing for 2023 and we look forward to sharing exciting news with you in due course! 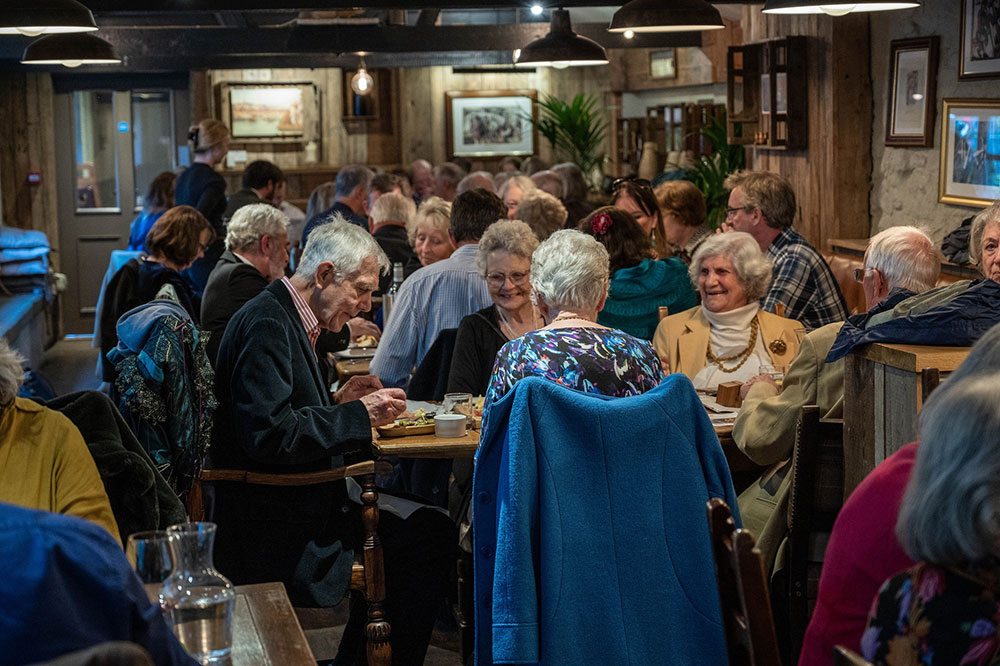 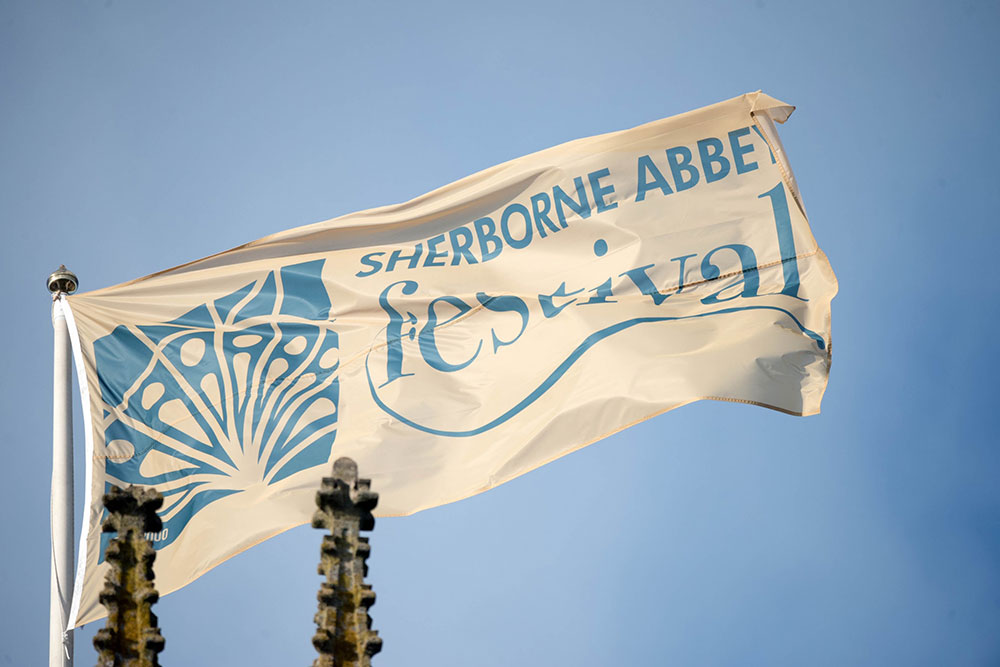 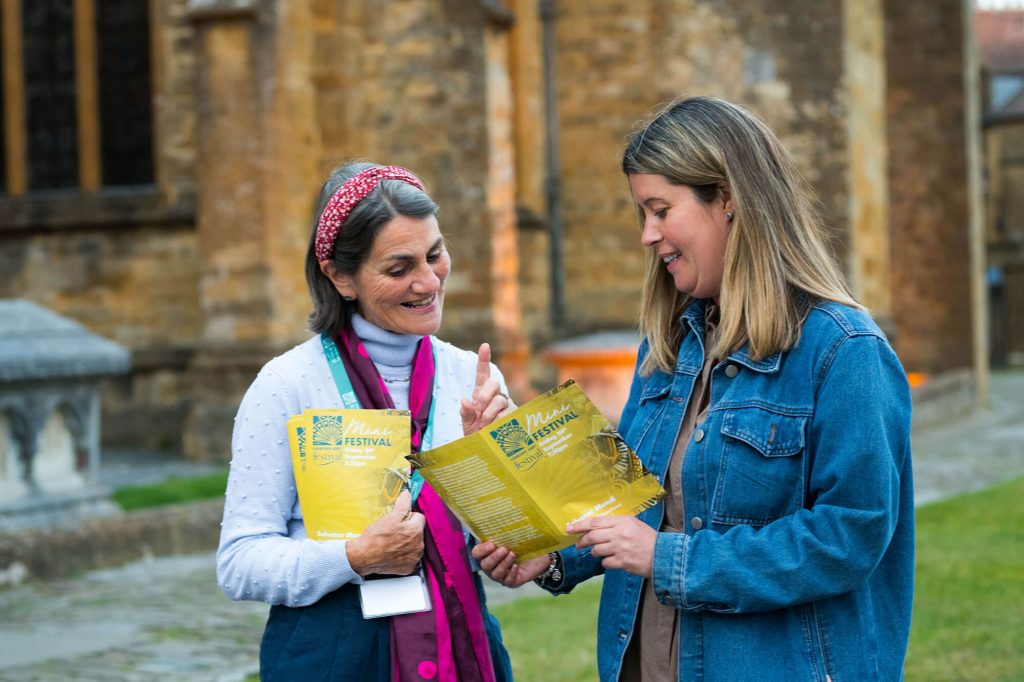 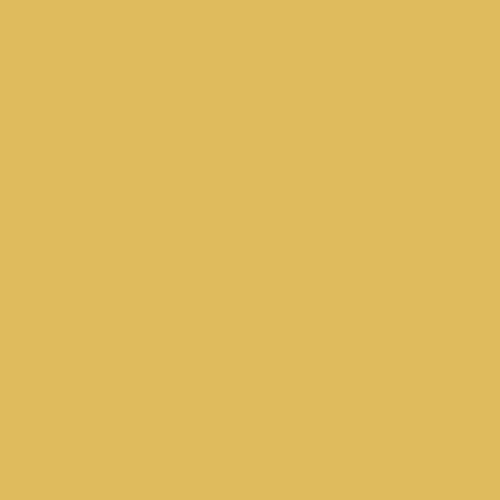