Joy as Joey the War Horse comes to Sherborne

Following months of planning, hundreds of people enjoyed a truly memorable photo call by Joey the National Theatre’s War Horse outside Sherborne Abbey on 7th November.  Later that evening, more than 600 people listened to the moving story of War Horse, read by Author Michael Morpurgo and accompanied by the music and singing of John Tams and Barry Coope.

This was despite a heart-stopping moment earlier in the day when Joey’s transport vehicle lost a wheel on the A303 near Mere and a rescue operation had to be put in to place to bring him home to Sherborne; with Festival organisers determined the crowds should not be disappointed.

See the news story from the Western Gazette and the incredible images from the day by Terry Fisher.

Joey’s visit was Sherborne Abbey Festival’s gift to the town and a perfect start to Sherborne’s weekend of Remembrance. 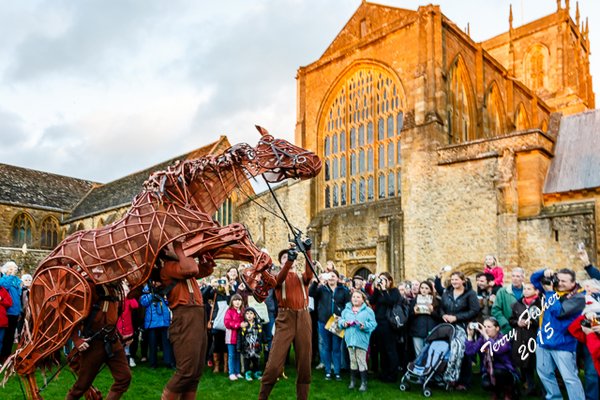