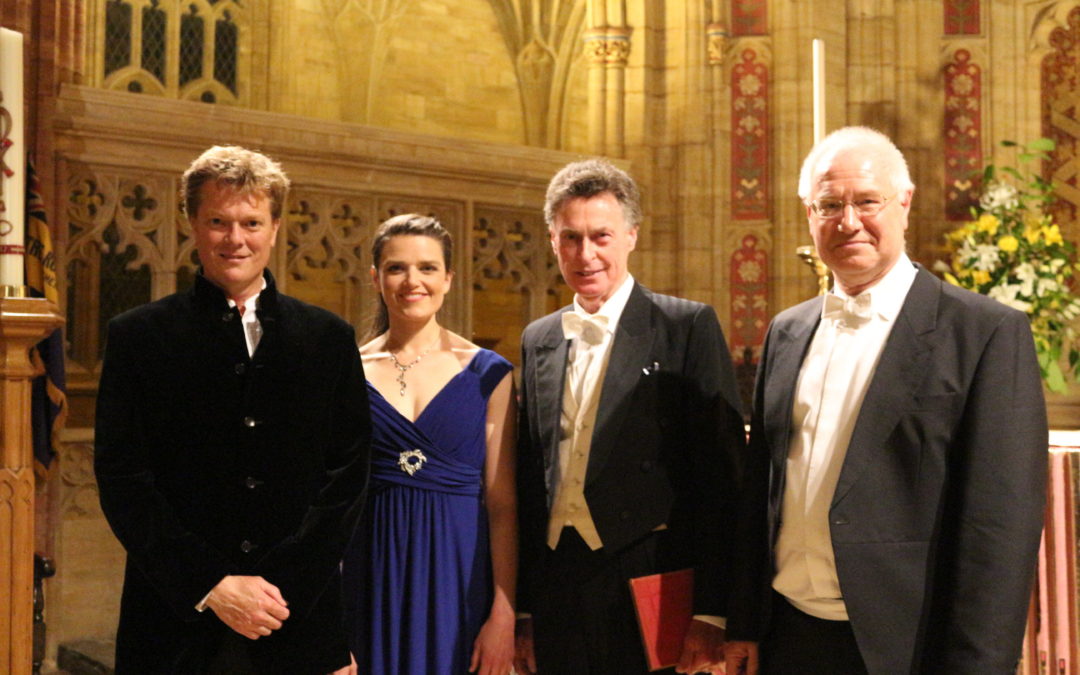 ELGAR’S masterpiece The Dream of Gerontius was the choice for one of the major concerts in this year’s Sherborne Abbey Festival.  Cardinal Newman’s original poem, published in 1865, is a vision of what happens to a man’s soul after death.  Some thirty five years later, Elgar set a shortened version of the poem as an oratorio for the Birmingham Festival, and in so doing produced one of the crowning glories of English choral music.

“This”, as he famously wrote on the last page of the manuscript, “is the best of me.”   Last night’s outstanding concert, under the expert baton of Paul Ellis, director of music at Sherborne Abbey, featured the Sherborne Festival Chorus, the Chameleon Arts Orchestra and the solo voices of Frances Bourne (mezzo), Toby Spence (tenor) and Paul Savidge (baritone).

The effect of the oratorio depends, to a very large extent on the tenor soloist, and in Toby Spence we had sheer gold.  No stranger to the role, he gave us an assured and passionate performance, almost operatic times but intensely personal too.  There was real sense of torment in “Rouse thee, my fainting soul” which lead most effectively into the anguish of “Sanctus fortis”.   His was a performance that covered the whole gamut of emotions, beautifully nuanced, heart-wrenching at times but never out of control.

There was a great tenderness in mezzo Frances Bourne’s singing too.   I liked the warm authority in her voice in such phrases as “You cannot now cherish a wish which not ought to be wished” for example, part of the long duet near the start part of Part II.   Unfortunately however, some of the music seemed just a little too low for her vocal range.  Whilst many of those passages in her upper register were impressive – she reached that glorious top A in her final “Alleluia!” quite effortlessly – from where we were sitting at least, several of the deeper sections were lost.

Without any doubt, one of the most thrilling moments in Gerontius is “Proficiscere anima Christiana” – that point in the music when we first hear the bass soloist (or in this performance the baritone).  Peter Savidge, positioned, I gather, in the pulpit (I couldn’t see him myself) was electrifying.  Known for his elegant and well-focused style of singing, his richly commanding delivery of both these words and of “Go forth upon thy journey” and then, in Part II, his roundness of tone when, as the Angel of the Agony, he sings of “that glorious home” was spine-tingling.

Formed in 2006, the Sherborne Festival Chorus gives local people the opportunity to sing with professional musicians at the Festival. From the delicate, ethereal sounds of “Holy Mary, pray for him” through the solemn intensity of “Be merciful be gracious” to the excitement of the “nethermost fire” their performance was wonderfully controlled.  The gentle chanting of “Noe from the waters in a saving home” and the answering “Amen” was particularly moving as was the inspiring build-up to “Praise to the Holiest in the height”.  Definitely the stuff of goose pimples. Although one could perhaps have wished for just a little bit more welly in some of the more dramatic passages, the quality and precision of the festival chorus was never in doubt.

As with the music of Wagner, the orchestral writing in Gerontius is of immense importance – carrying, as it does, many tiny phrases (or leitmotivs) each representing some significant aspect of the text, (sleep, fear, judgement etc.) which help bind the work together.  As the programme notes tell us: “Elgar’s orchestra becomes an expressive partner with the voices, equally important in the work’s dramatic revelation.”   The Chameleon Arts Orchestra were a truly expressive partner.  Aided by the Abbey’s resonant acoustic, they played with clarity and intensity from the outset, Elgar’s orchestral colour, rich detail and broad sweeping phrases stirring my soul and, I dare say, the souls of a good many of us in the audience.   Although ours were far from the best seats in the Abbey, we did have a fine view of the bass drum and gong, both used to great effect.  In fact, it probably was the place to be when it came to the chorus of demons and to the terrifying build-up to that famous fffzp chord, when for one moment, we catch a glimpse of God.

It was a memorable evening.  Conductor Paul Ellis and Festival Director John Baker are to be not only congratulated, but thanked too.   As Elgar himself wrote in a letter to a friend “The trees are singing my music – or have I sung theirs?”  The trees were certainly singing in Sherborne last night.