A rich history and an exciting future 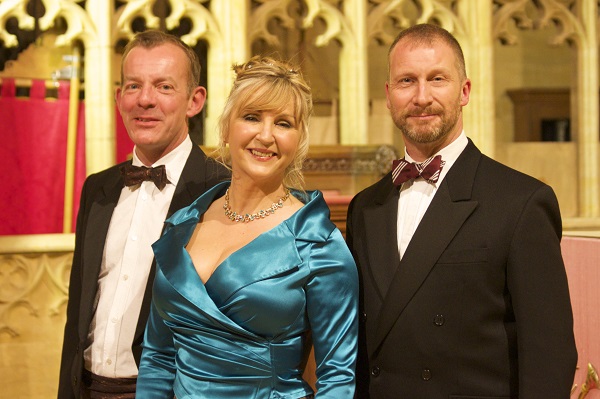 Founded by Artistic Director John Baker in 2000, Sherborne Abbey Festival celebrates its 20th season in 2019. Time to reflect on the achievements of this award-winning local event while also looking with excitement to the future.

Sherborne Abbey Festival is unique, being charity-run entirely by experienced volunteers, and also in its support of musical good causes. It is the event that gives back to the community: Since its inception, more than £300,000 has been redistributed through scholarships and grants; along with ongoing support of the music and choir at Sherborne Abbey and maintenance of the Abbey’s famous Tickell organ (installed by Gray and Davison in 1856 and rebuilt by Kenneth Tickell & Co in 2005). Indeed, even the cushioned pew seats in the Abbey and Quire are gifts of the Festival. The town’s annual Young Musician of the Year competition is also a beneficiary, as well as well as countless talented young individuals who have been awarded grants towards music studies or help to purchase professional musical instruments.

One of the ways the Festival is celebrating its 20th season is with the launch of a contemporary new look, inspired by the famous vaulted ceiling of Sherborne Abbey, with a logo designed by Kevin Swindell, a local Dorset designer based at Wyke. This year’s programme also includes a number new initiatives aimed to extend its outreach and scope. Two free events especially for children include a guitar workshop and a relaxed film screening of a 1940 Disney classic Fantasia while visitors can expect the unexpected, with pop-up opera in the high street, in collaboration with Dorset Opera, and two unique music and dining events which wrap around the five days. Sherborne Abbey Festival is renowned for being inclusive, with something on offer for all ages and musical tastes and up to seventy percent of concerts free entry; it really is a unique offering in a very commercial world and something to be proud of.

But how did the Festival originally come about?

The story of this very successful Festival begins with the initiative of its founder and present Artistic Director John Baker back in 2000. John would be the first to confess that he had a limited musical upbringing; however, when his son became a chorister at Wells Cathedral in 1995 he set out on a musical journey of his own. Particular inspiration came from his first visit to the Edington Music Festival in Wiltshire; a choral liturgically-based festival that has now been running for 65 years, which made John think how a similar series of events could work in the equally beautiful surroundings of Sherborne Abbey.

With the Vicar’s support a working party was set up to explore the idea of how the Festival could work, with the initial group made up of John Baker, The Revd. Canon Eric Woods, Malcolm Archer, Master of Choristers at Wells Cathedral, and John Padley, Choir Master at Sherborne Abbey. The working party decided that it would be a good idea to aim for a four day festival at the beginning of May 2000. It was also agreed that it should be based around the liturgy, rather than being purely liturgical, as this would allow the Festival to host a wider variety of concerts. With many ideas and much enthusiasm, there was only one key factor that the working party needed to arrange for the first festival to go ahead – the funding. In this instance it was the Parochial Church Council (PCC) who came up trumps with enthusiastic support and a loan of £1000, to act as a ‘pump primer’ in order to facilitate funds to be obtained from other sources. This loan was agreed between John Baker and the PCC on the understanding that any profits made would be used to fund future festivals and to promote music in the Parish.

The principal aims of the Festival were set out to be outreach for the Abbey, staging attractive programmes with internationally renowned performers as well as engaging with young people to help them build on their musical talents. Professional performances are interspersed with free concerts by hugely talented students of the town’s schools, choirs and music groups, ranging from early music, madrigal and chamber music to jazz and barbershop. In paricular, Sherborne School, Sherborne Girls, The Gryphon School and Leweston School all have very strong music departments and the concerts they present are of an extremely high standard. This combination gives a unique flavour to the Festival, enticing people through the doors in order to experience the beauty and majesty of Sherborne’s historic Abbey Church.  Apart from local patronage, it was hoped the Festival would attract visitors from far and wide to the town, to Dorset and to the South West in general. Even then, as now, tourism was crucial to the town’s viability.

The initial working party was the basis for the Abbey Festival Committee when it was formed, with the then Sherborne Abbey Treasurer, David Lovelock, joining the committee as Treasurer. Having decided the line-up for the first Festival, which included Clifton Cathedral Choir, Bath Camerata and Wells Cathedral Choir, a steep learning curve was faced as to how to get the publicity leaflets, posters, programmes and tickets designed, laid out and printed. With no funds available for professional design, John Baker had no option but to learn, together with Richard Churchill – a verger at the Abbey, how to design and lay out everything, from tickets and programmes to websites and posters. The first Festival cost £5,000 to stage; it made approximately £2,500 profit and, as a consequence, the PCC loan was repaid even before the event had actually taken place.

In 2003, the Festival established its Patrons scheme offering people an opportunity to support the event financially and help it grow. There are now four levels of patronage: platinum, gold, silver and bronze – all offering different benefits, from advanced bookings, generous ticket discounts, pre-concert drinks and even a patrons’ party.

Another milestone in 2006 was the formation of Sherborne Festival Chorus, a non-auditioning community-based choir of 140 people, created by John Baker to enable and encourage local people to sing to a high standard within an informal environment. The Chorus is led by Paul Ellis, a professional conductor and Director of Music at Sherborne Abbey. The choir’s inaugural concert of Haydn’s Creation in April 2006, with professional soloists and orchestra, was highly acclaimed and they have performed to capacity audiences in the Abbey every year since.

How the Festival has grown since those early days! Technology (including our new ticketing system in 2019) and social media has made the Festival an entirely different event from the perspective of both staging and promotion. Outreach is magnified through a strong online presence, a loyal mailing list and the benefit of electronic communication. One thing hasn’t changed though and that’s the fact the organisation is still entirely run by volunteers. It was a few years before organisers felt brave enough enter major awards but since then the Festival has scooped many accolades, especially for tourism. In 2017 it was a real highlight to be awarded Gold in the Dorset Tourism Awards and Joint Best Event of the Year, followed by Silver in the 2017/18 South West England Tourism Excellence Awards. Judges deemed the Festival ‘Just beautiful’ and acknowledged the contribution it has made to the economy of Sherborne, one of Dorset’s most iconic market towns.

Over the years the Festival has attracted many world-class singers, musicians and performers– some have loved the experience so much they have agreed to come back more than once! Notable stars include Lesley Garrett CBE, Sir James Galway and Nicola Benedetti CBE, along with renowned vocal ensembles such as The Sixteen, Tenebrae, The Tallis Scholars and Voces8. From jazz to gospel and opera to dance – not forgetting a most memorable performance by Michael Morpurgo and the National Theatre’s own War Horse – the Festival has staged hundreds of stellar performances over twenty seasons and welcomed close to a hundred thousand concert-goers, all of them enchanted by what Sherborne Abbey and the surrounding town has to offer. And long may it continue.